Dogs Can Eat the Strangest Things!!

Buster loves to play and is very curious. He managed to get hold of a couple of disposable shop towels and had swallowed them before his owner could get them away from him. His owners brought him in as soon as it happened. Since it had happened so quickly, we were able to sedate Buster and use an endoscope to find the towels. Luckily, the towels were in the stomach and we were able to retrieve the towels using the scope. Which means Buster did not have to have surgery!! YAY!!  The scope is equipped with a pair of clamps that allow certain foreign objects to be retrieved. Dr. Craig was able to visualize the towels with the endoscope and used the clamps to pull the towels out of the stomach. Buster came in the next day for a follow up and was 100% his normal, frisky self. 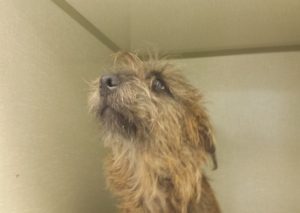